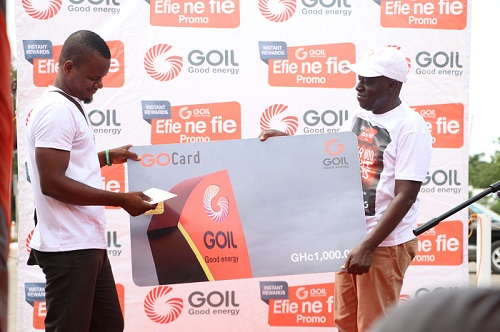 GOIL Company Limited has rewarded 920 customers at its first Ultimate reward scheme of the 2019 Efie ne Fie promotion in Accra.

Speaking at the ceremony, Managing Director and Group CEO of GOIL, Kwame Osei-Prempeh noted the Rewards are in fulfilment of a promise made at the beginning of the national promotion – that customers would be rewarded at the end of the month, apart from the thousands of instant rewards received.

“Today, it is free bonanza. 920 customers who accrued the highest points in our promotion will walk home with tantalising rewards of free fuel worth 1,000, 500 and 300 cedis on GOIL GoCards this month alone,” he added.

Beneficiaries who received the awards were from Dansoman, Achimota, Madina – and as far as Wa, Tumu, Tamale, Tarkwa, Nkawkaw and Ohwim near Kumasi – indicating the national character of the promotion. This, Mr. Osei prempeh noted, attests to the diverse backgrounds and locations of beneficiary customers.

The Head of Fuels Marketing, Marcus Deo Dake, explained that over 2,500 customers will benefit from the 3 Ultimate reward ceremonies at end of the promotion in January 2020.

The 1st Ultimate reward ceremony was attended by some Management of the company, GOIL, Brand Ambassador of GOIL-Prof. Azumah Nelson, officials from NPA and COPEC, Burma Camp Drivers’ Union officials, Taxi and Tro-tro drivers, private motorists and the public.

Moving from opinion-based Policymaking towards a more “Evidence-Based” one

62 years of Made in Ghana campaign… have we made progress?