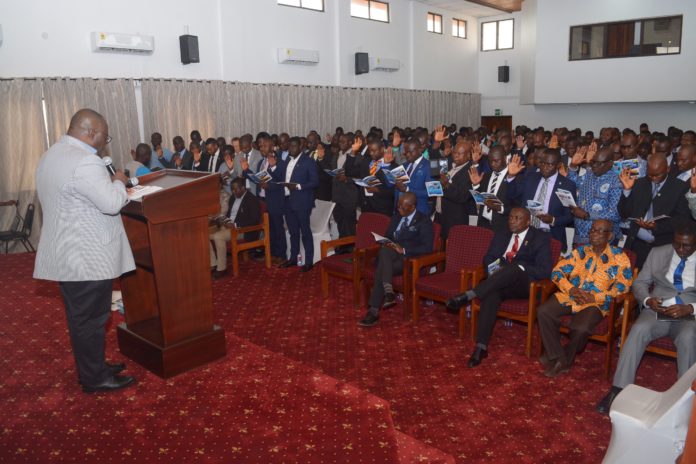 The Ghana Institution of Engineering (GhIE) has inducted 172 new Engineers at its 22nd Induction ceremony held at the Engineers Centre, Roman Ridge, Accra.

Swearing-in the Inductees, the President of GhIE, Ing. Steve A. Amoaning-Yankson, in a message read on his behalf by the Vice-President of GhIE, Ing. Theophilus Nii Okai, admonished the new Engineers to avoid adopting a get-rich quick attitude, envy and resentment as they pursue the purpose of their training. He also cautioned the new Engineers to be watchful of their character ethics, since this forms the foundation that moulds the Engineer to be successful in his or her practice.

The Executive Director of GhIE, Ing. Kwabena Agyei Agyapong, reminded the new Engineers to abide by the mission statement of GhIE to develop, promote and sustain sound and competent Engineering practice in Ghana comparable to global standards. He called on all Engineers, especially the newly-inducted ones, to actively take part in the upcoming 49th GhIE Annual Conference slated for Volta Hotel, Akosombo, from Wednesday, March 27 to Saturday, March 30, 2019.

Advising the newly-inducted Engineers, the Immediate past-President of GhIE, Ing. Mrs. Carlien Bou-Chedid said: “This certification you are given is not without conditions. You must continue to maintain and update your knowledge, experience and character throughout your working life. Thus, in the yearly renewal of your certification, you will be required to show that you have undertaken activities twhich have contributed to your continued professional development (CPD)”.

The 22nd Induction ceremony was attended by Council members of GhIE; the President-Elect of GhIE, Ing. Leslie Ayeh; past-Presidents of GhIE; Chairpersons of the various technical divisions of GhIE; family members and friends of the newly-inducted Engineers.

The art of price negotiation: the management style (1)

The role of corporate communication in managing a CEO