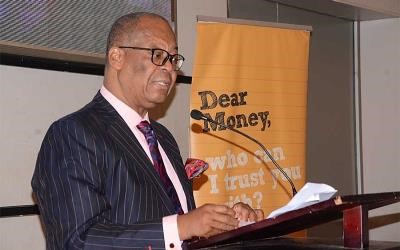 GCB Bank Ltd. has extended financial support to the tune of GH¢100 million for the country’s energy sector this year.

The Managing Director of GCB, Mr. Anselm Ray Sowah who announced this, explained that the companies were “supported with trade finance and currency trading for the importation of petroleum products”.

Speaking at the bank’s breakfast meeting with its energy sector customers, the MD mentioned that financial assistance was extended toward relocation of the Karpowership from Tema to Takoradi among other projects within the sector.

Mr. Sowah said the Bank had also partnered one of the big local Oil Marketing Companies to establish a bitumen plant in Tema to support local production of bitumen.

He said over the years GCB Bank has been a critical partner to electricity generation and distribution companies, in respect of their working capital needs, trade finance and other investments in infrastructure.

“We have also assisted them with currency trading to help manage exchange losses with regard to their imports,” Mr. Sowah said.

The Deputy Managing Director-Operations, Mr. Samuel Amankwah, described the meeting as necessary in providing feedback to enable the bank’s work to exceed their expectations.

The Acting Head of Corporate Banking, Mr. Antwi Boasiako, in his welcome address underscored the important role played by the energy sector in the economy, hence the engagement with them.

He added that GCB Bank is the leading bank in the country supporting the power, oil and gas sectors.

Ghana launching the E-Cedi is a no brainer – Innovation on...