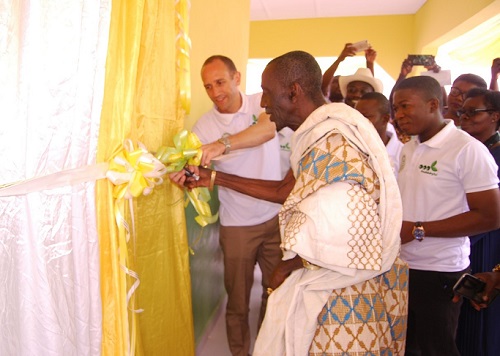 HPW Fresh and Dry Company, a fruit processing company, has officially launched a 3.5MW biomass boiler at its factory at Adieso in the West Akim District. The company has also opened a Montessori, HPW Fairtrade Montessori, to support education in the community.

At an event dubbed ‘Saving the Planet for the Future Generation’, the boiler is replacing the high cost diesel-fueled plants, while the Montessori will be caring for the rising needs of its hardworking staff and fulfilling its social responsibility.

This state-of-the art plant is to produce heat (energy) for its factory, which produces a wide range of fruits in diverse variations; both fresh and dry for local consumption and exportation.

Speaking at the launch Maik Blaser, Chief Executive Officer of the company, said: “the 3.5MW biomass boiler was manufactured to reduce its dependency and the harm it does to the environment. The boiler which was manufactured locally, will serve as a heat producer for the drying process of the fruits.” This, he said, will minimize the company’s cost of buying diesel to undertake the operation.

Interestingly, this biomass boiler is fueled with in-house residue that is collected after the fruit extractions are completed, and other wastes collected from sources in and around the community.

The district’s chief executive, Eugene Sackey, in an interview, also encouraged the company to work hard to expand its activities to accommodate more of the unemployed youth. He also assured them of government’s commitment to support private businesses to grow as part of the One District, One Factory (1D1F) policy.

“Government will assist as much as possible to ensure that the implementation of its flagship 1D1F will travel nationwide. He also commended HPW for introducing the biomass boiler since this will minimize the district’s generated waste.

The Montessori, the first project undertaken by the HPW Fairtrade Premium Committee is aimed at relieving the company’s nursing mothers, and the Adieso community of their caregiving needs and early childhood education.

He also added that the building of the crèche will facilitate growth in production since nursing mother can peacefully resume to work after maternity leave, with their babies closer to them without worrying too about how the babies are being taking care of.

“We have the best of workers any company would ever wish for and to leave the comfort of their homes to a rural area to work is not a pleasant situation especially if there is no proper health care system and good educational facilities to cater for them and their families.”

The Paramount Chief of Adieso, Osabarima Asare Oduro, noted that the HPW Fairtrade Montessori is a good initiative undertaking by the company. He urged the people to do well to maintain the infrastructure and the quality of tuition to meet up with the standard of both GES and the Montessori curriculum.

“I want to edge all of us to do our best to make sure we protect this facility as much as we can so it will live to serve all of us”, he said.

Siemens shows love to children of Village of Hope