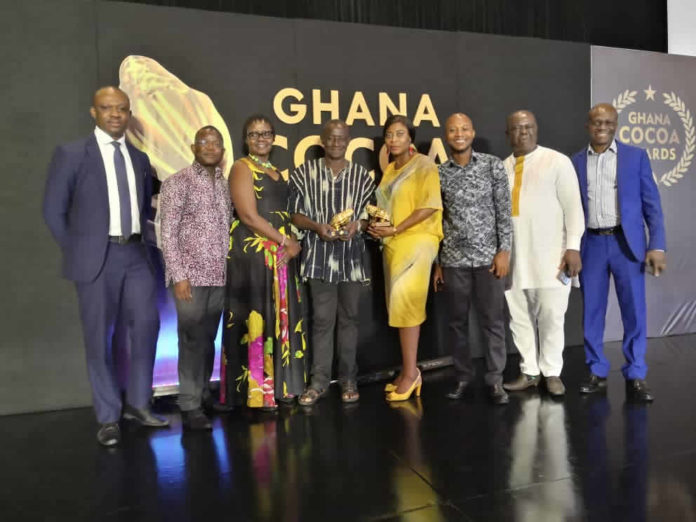 Fairtrade Africa has won the Best Certification Scheme of the year, at the maiden edition of the Ghana Cooca Awards held on Friday 22nd November 2019. The Awards were received by the Executive Director, Dr, Nyagoy Nyongo, the Head of Region, Mr. Edward Akapire and the Regional Cocoa Manager for West Africa, Anne Marie Yao. The Ghana Cocoa Awards celebrates excellence in the cocoa industry for different players and stakeholders. As an organisation committed to empowering farmers and producers across Africa and the Middle East, Fairtrade represents 1,050,000 producers and 628 POs across 33 countries.

Fairtrade’s certification label is more than a Standard

The Fairtrade standards ensure that cocoa is produced in an environmentally sustainable way through the introduction of good agricultural practices. The organisation introduced environmental projects such as the Dynamic Agro Forestry Project which was established to enable and improve competitiveness and risk diversification for smallholder farmers through facilitating their engagement in multiple product markets with a market oriented approach while addressing deforestation. The project encourages practices such as tree planting, no burning and diverse cropping on the same piece of land outside the cocoa season. The project being piloted in Ghana promotes the cultivation of yam and other associated products for income generation and food security.

Through its West Africa Cocoa Programme, Fairtrade Africa supports cocoa farmers to increase their yield by adopting practices such as the development of business strategic plans, policies on gender and social protection, climate resilience, risk assessment and internal management systems. Fairtrade’s sustainability programmes include a component on fair pricing based on a minimum price and also a premium that goes directly to the farmer cooperatives who take collective decisions on the use of the premium for developmental projects.

Fairtrade also advocates for child protection and child rights by introducing models like the Youth Inclusive Community Based Monitoring and Remediation (YICBMR) module which gives the responsibility to the cooperative and the communities to be involved in the entire process geared towards reducing the incidence of Child labour. The unique approach of this module is that it involves the Youth, opinion leaders and cooperative leadership in dealing with the issue. Children themselves identify potential risks that create unsafe conditions for them in the community, and remediation is put in place to address those challenges. As a result of this module, a number of prevention and remediation related activities have been conducted which have contributed to the increase in school enrolment of children.

The Dignity for All (D4A) is a project which started in 2018 that involves schools, the leaders of cooperative unions and opinion leaders of the community. The programme is a four year programme being implemented in the Asunafo North Municipality in partnership with Asunafo North Cooperative Cocoa Farmers’ Union in the Ahafo Region and across all the 67 communities of the Union. Under the project, Fairtrade has so far sensitized 30 communities on Child Protection. The organisation has also trained 30 teachers on Safe School Programme to enable these teachers also support Child Rights Clubs, School based Child Parliaments. Remediation efforts by Fairtrade on this project have also been successfully implemented with the support of the Department of Social Welfare and Community Development. The D4A project has so far reached 6,200 direct beneficiaries as at the end of 2018.

See Also:  We are open to offers for new airline—Aviation Minister

Fairtrade supports producer organisations to strengthen their management systems. When Farmer Cooperatives are formalised, they focus on innovation in the face of climate changes, inclusion to support gender mainstreaming, and improvement in their production, distribution and marketing and are in better positions to advocate for equality in trade. These tenets are the foundational blocks for sustainable cocoa production.

Receiving the Award on Behalf of Fairtrade Africa, the Executive Director of Fairtrade Dr. Nyagoy Nyongo said: “Fairtrade’s unique approach to empowerment of farmers has brought about significant improvement in the lives of many farmers on the continent. We are happy that Fairtrade’s certification programme has been recognised and we dedicate this award to all our partners, stakeholders and all farmers who we seek to empower to decide on their own future”.

At Fairtrade Africa, we believe in empowering Farmer cooperatives to play a significant role in their own development for the attainment of the UN Sustainable Development Goals (SDGs).

Africa: Continent of Challenge and Opportunity