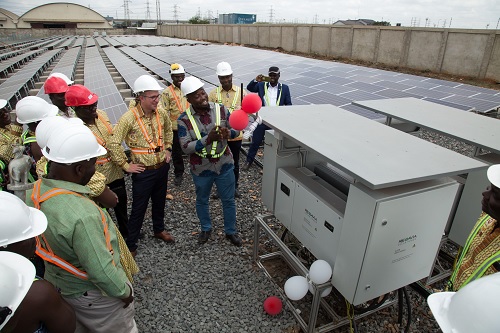 Barry Callebaut, a leading international chocolate manufacturer and one of the leading processors of cocoa in Ghana, has officially inaugurated its newly installed solar generation facility in the factory in Tema. The installation of the 504 KWp kilowatt peak (KWp) solar farm forms part of a number of initiatives by the company aimed at reducing its carbon footprint in its operations.

Jo Thys, Vice President of Barry Callebaut Cocoa, Africa Region, indicated that the installation of the renewable energy facility is timely considering the effect on climate change which is currently a gigantic relevant topic in the world. He stated that the solar farm marks another major stride in the history of the company’s investment in a sustainable value chain.

“This solar installation could not have come at a better time than this. Today we all feel and see the effect of climate change which has also become a huge topical issue in the world. Currently 14 out of 59 [representing 24percent] factories within Barry Callebaut Group are running on 100percent renewable energy. This solar farm is another important step in our long history of investing in a sustainable value chain.”

He emphasized that “the installation of the 504 Kilo Watt peak solar facility will help Barry Callebaut Ghana to record at the end of each year, an estimated reduction of 325 tons of carbon (CO2) emissions from our operations.”

Charity Sackitey, Managing Director of the company, said being the first private cocoa processor to be established in Ghana 18 years ago, the company has systematically invested in production capacity and product range thereby increasing value addition to the raw cocoa beans. “What we are witnessing today is one of many initiatives Barry Callebaut Ghana has taken toward making our operations ‘greener’ and testifies to our commitments toward protecting the environment.”

According to her, “the Barry Callebaut Group announced in 2016 the bold ambition to make sustainable chocolate the norm by 2025 when it launched its sustainable program ‘forever chocolate’.  Under the forever chocolate program, Barry Callebaut has committed to four targets to address the biggest sustainability challenges in the chocolate supply chain, which include eradicating of child labour from the supply chain, to lift more than 500,000 cocoa farmers out of poverty, to use 100percent sustainable ingredients in all products, and to become carbon and forest positive”.

Present at the launch was the Executive Secretary of the Ghana Free Zones Authority, Michael Okyere Baafi, applauded Barry Callebaut for going renewable energy, stating categorically that it is the way to go.

“It was very heartwarming when I received the letter that Barry Callebaut wants to go renewable energy and so I want to commend them. And we are encouraging almost every company within the enclave to venture into renewable energy because it is the best way to go.”

He also indicated that the amendment of the Ghana Free Zones Act 504 (Act 2005) which is expected to come into effect soon will seek to address discrepancies in utility tariffs between companies located in the free zones enclave and those outside the enclave.

Representing the Minister of Energy, Engineer Seth AgbeveMahu, Deputy Director of renewable energy commended Barry Callebaut for the bold step and called on other companies to do same. He indicated that this will help the government to meet its ten percent target of renewable energy in the national energy mix.

Social networking in the eyes of the hacker, attacker and the...