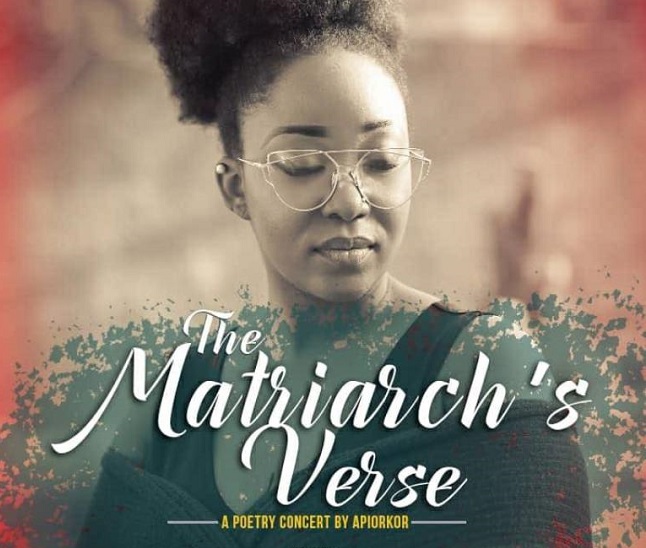 After many years of serving poetry fans with thought-provoking poems, award-winning poet, Apiorkor Seyiram Ashong-Abbey is out with a stellar piece of work; an anthology of her poems and that exhibits her experience in the Arts industry.

The book titled ‘The Matriarch’s Verse’ will be launched at the Swiss Spirit Hotel and Suites Alisa in Accra on October 4, 2019.

“The Matriarch’s Verse” seeks to celebrate, to expose, to critique, to question and to highlight our Ghanaian-ness in the 21st Century:

Apiorkor says ” I am a mongrel; a mixed breed of Ga, Ewe, Akuapem, English, Middle-Eastern and American cultures; I am a Third Culture Kid.”

Her socio-cultural experiences are interesting and might appear to be unique. But the truth is that there are several other Ghanaians who are secret sharers of her life.

Such people lack access to platforms that would allow them to tell their collective story, so that their societies and communities can re-think all of the things that affect them.

Also a literary critic, gender activist and versatile creative, her poems embrace a prosaic style alongside sharp, vivid and vibrant imagery which have captivated audiences in Ghana and beyond.

Currently, a senior producer at Citi FM/Citi TV in Accra, Ashong-Abbey’s performances are varied and animated. She injects life into her poems with classical Afro-pop, Reggae and Rock music, thereby creating a conducive atmosphere for patrons to sit back and absorb her works.

Published by DAkpabkli and Associates and with a captivating foreword by the renowned Bernard Koku Avle, “The Matriarch’s Verse” is available on booknook.store, Amazon.com etc.

Apiorkor’s website, apiorkor.com will also be unveiled, on the night.

After the book launch, she will be holding the second edition of her poetry concert, The Matriarch’s Verse

– The Concert, which started last year and has received rave reviews.

If you reside in Ghana, then visit Booknook.com to preorder “The Matriarch’s Verse”. Overseas purchases can be made via Amazon.com, for an e-book version on Kindle.

Who wins the two-bedroom house? Mentor grand finale comes off this Sunday