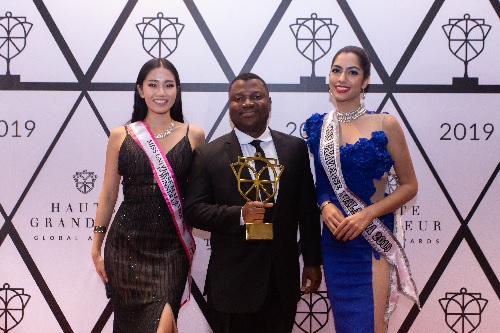 Well-known for his friendly and professional character, unique sense of humour and his infectious laughter, Yaw K. Mamphey joined Accra City Hotel as the Head of Sales & Marketing in January 2016. His connection with guests, key wholesalers, airline and industry partners and his own team led to his nomination as an excellent ambassador for Accra City Hotel.

When Mr. Yaw K. Mamphey was announced as the Marketing Director of the Year for Africa, there was a roar of excitement among the face to face promotions and marketing specialist’s workforce.

Mr. Mamphey took to the stage to claim his award, and deliver a speech to attendees. Speaking after the ceremony ended, Mr. Mamphey said, “I was delighted to be among the winners this year. It’s been a big four years at Accra City Hotel, and we’ve gone through a real transition and to be recognised with an award is a great honour. I am very fortunate to have a very talented team of people, who have a diverse but complementary skill-set. Apart from our ambition to be the best in the hospitality industry and increase market share, we also have a strong culture within the team of collaboration and the embracing of new ideas.”

Over 400 Industry professionals from all across the world travelled to the Malaysia’s capital for the event. Some of the most influential and successful figures in the industry flew in from Australia, America, UK and Ghana, specifically for the ceremony.

Mr. Mamphey was made aware of his nomination for the award a few months ago before the event, and the anticipation has been palpable. The Accra-based, face to face sales and marketing specialists, stepped onto the red carpet on arrival, before enjoying a champagne reception.

“Accra City Hotel is extremely lucky to have such a loyal and committed advocate and one who certainly deserves recognition for his dedication and hard work. Hosts like Yaw are the foundation to the success of Accra City Hotel, now and in the future,” Mr. Krabel said. “Yaw has established excellent relationships within the industry and works with them to deliver the best experiences for our guests. He is all about showing the world what Accra City Hotel has to offer,” he said.

A Global Haute Grandeur Hotel Award is a guaranteed golden stamp of excellence.

G-Money: The Mobile Money Service with best rates in the market

ACH Direct Credit records GH¢11bn in first half of 2018