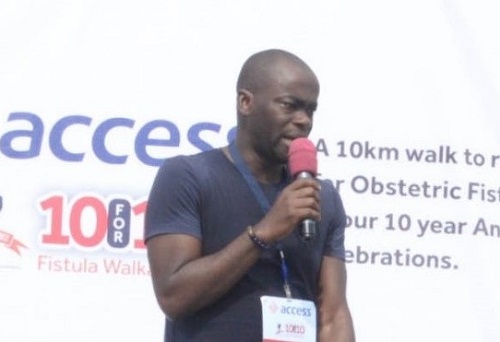 Mr. Olumide Olatunji, Managing Director of Access Bank Ghana – one of the leading retail banks, has called for a more concerted effort from stakeholders to kick fistula out of Ghana before the year 2030.

Mr. Olatunji made this call at the just-ended nationwide walkathon held by the bank to intensify advocacy efforts and secure charitable funds for the National Task Team for the Elimination of Obstetric Fistula. The walkathon was held in 10 regional locations across the country.

He announced that though Access Bank had successfully financed the surgeries of 100 affected women in deprived communities, the incidence rate of obstetric fistula is alarming and requires the support of other meaningful stakeholders in the country.

Speaking during the 10-kilometre walk in Accra, Olumide said: “In building a sustainable banking franchise, we are passionate about improving the health and well-being of the communities within which we work and operate. Having a healthy community, and for that matter a healthy workforce, will inevitably impact positively on the country’s economic output – ensuring that each and every one of us has an opportunity to prosper and live a better life”.

Access Bank’s commitment to eradicating fistula began in 2018 when it launched its innovative ‘Fist against Fistula’ campaign to tackle the issue and raise public consciousness. The campaign has so far brought together several partners: including the Ministry of Health, Ministry of Gender and Social Protection, the UNFPA, the National Task Team for the Elimination of Obstetric Fistula, Kaysens Gaisie Limited, Kasapreko and the Mercy Women’s Catholic Hospital in Mankessim, among others.

The Fistula campaign was recently adjudged ‘Health Project of the Year’ at the 2019 Sustainability and Social Investments Awards held at the Movenpick Ambassador Hotel in Accra last Friday. The campaign also won for the bank the accolade ‘Best Company in Specialty Healthcare Support Project’.

Over the past 10 years, Access Bank has championed the cause of several sustainable initiatives, which have not only won it awards, but more importantly positively affected the lives of thousands of Ghanaians.

Today, the bank operates across 51 locations in 10 regions of Ghana. It is a subsidiary of the Access Bank Group, which is the largest bank in Africa by customers – over 30 million, with presence in almost every continent including key global economic centres such as London, Dubai, Lebanon and Beijing.

I won’t advise anyone to travel to Libya—Ex-Migrant