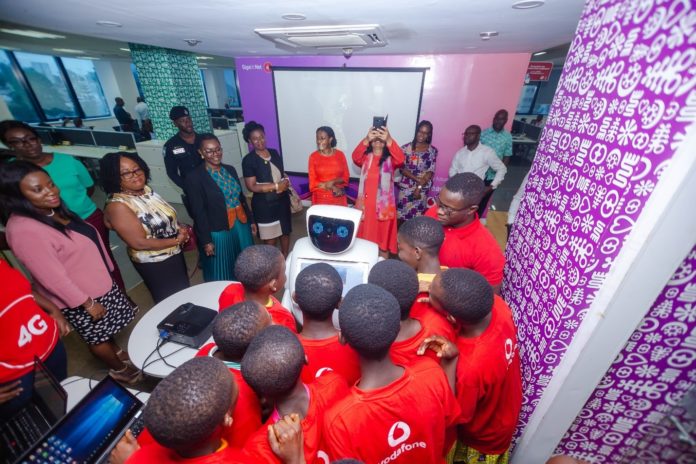 The fifteen-year old girl stood expectantly with a huge pair of robotic headsets around her head. In her tiny hands she held what looked like two virtual reality gear-sticks; ready for battle.

The giant virtual reality screen behind her came to life and she jumped into action, shooting at unseen figures across the room – and for a moment, in her mind, she was saving humanity. The seventh floor of Vodafone Ghana’s headquarters at Airport was packed to capacity. Minister for Communications, Ursula Owusu-Ekuful, was sat attentively and looking on. Alongside her sat Vodafone’s Chief Executive, Patricia Obo-Nai.

Kicking, screaming, shooting, ducking and jumping, the young warrior was visibly shaken. Behind her, the crowd could see on a screen what she was aiming her shots at. There was lots of laughter in the room. Everybody seemed to be enjoying themselves.

It was Wednesday 21st August 2019, and Vodafone Ghana was giving a digital tour to 60 girls from the Western Region’s Girls-In-ICT initiative. Communications Minister, Ursula Owusu-Ekuful – an advocate of the initiative, had also taken time off to come and be part of the event.

To make this happen, a team at Vodafone with support from Chief Executive Patricia Obo-Nai and Technology Director, Srabasti, had put a sophisticated programme together with brief sessions in 3D printing, VR technology, Robotics, Coding and Machine learning. These were meant to give the girls a glimpse into the future.

On the first floor, staff volunteers Manuella and Alfred were busily piecing wires and other components together to create mini-robots. The young girls, fascinated, hung onto their every word and move. A whole new world was opening up before their eyes.

Soon Ursula and Patricia joined them. A white, imposing humanoid robot stationed at the entrance said hello to the minister.

“How are you?” Ursula replied.

“Oh, that is interesting,” said the robot.

“What is interesting?” Ursula shot back.

Pockets of laughter could be heard all around.

Patricia’s passion for Women in technology has never been in doubt. Even before becoming Chief Executive, she had been instrumental in setting up the Women in ICT group at Vodafone. She was also a founding brain behind the Female Engineering Students Sponsorship Programme (FESSP). The company’s Diversity and Inclusion programme has her as a key sponsor.

“What is terrific about Vodafone is that we recognise the ability of young women to change their eco-system through the power of technology,” she said to welcome the girls.

The Girls in ICT programme seems to have taken-off on a good note, with the full backing of government through the Communications Ministry. Already, 60 brilliant girls are being empowered to take up studies and eventual careers in ICT to bridge the gap between male and female participation in this field. It is a known fact that there are greater benefits to be reaped by Ghana if a good number of girls take up the challenge.

“These are some of the things we are supporting in order to change attitudes toward ICT in Ghana. I am happy to say that coding, for example, will be introduced in the mainstream syllabi for the next academic year,” the Communications Minster remarked in a conversation before the tour ended.

Over the years, Vodafone has been instrumental in initiatives that drive digitalisation and women inclusion. Through its Foundation, the company is already making waves across the country with its Nationwide Coding programme as well as its digital education platform – Instant Schools. The coding project is to empower 10,000 youth in five years with basic coding skills, while the Instant Schools platform has already recorded close to 5 million hits on the site.

“As a very progressive company, we view technology as our stock-in-trade. Our brand promise – The Future is Exciting. Ready? – represents what we mean by giving our customers and the needed community, confidence and optimism,” concluded Technology Director, Srabasti Bhattacharjee. 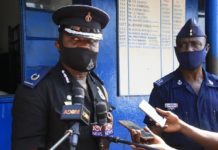