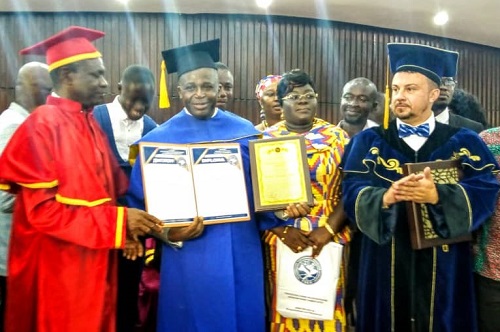 The Ternopil National Economic University, Ukraine, has conferred honorary doctorate degrees on four distinguished Ghanaian entrepreneurs for their selfless contribution to development of the local economy.

The awards were in recognition of their entrepreneurship, leadership and selfless contributions to the advancement of humanity, as well as their overall contributions to Ghana’s socio-economic development.

They were honoured at an event held over last weekend at the Kwame Nkrumah University of Science and Technology, under the auspices of the Bureau of Research on Governance, Commerce and Administration (BORGCA) and Confederation of Governance Assessment Institute (COGAI).

Professor Gregory of the university said the contribution of Mr. Adjei and the three others in founding many companies and institutions has created jobs for many people in the community and Ghana at large.

“Your loyalty in supporting orphanages, schools, deprived communities, villages, fellow businessmen/women – and also giving scholarships to students within and across boundaries, has today earned you this honour,” he added.

Prof. Gregory said Mr. Adjei is a worthy model-magnate, a well-founded philanthropist and a beacon of hope to many Ghanaian youth and the entire African continent.

See Also:  Asantehene urges World Bank not to renege on its mandate

He commended the awardees for contributing positively and immensely to the development of Ghana.

Mr. Isaac Rockson, the Communications Strategist and Director of International Relations for BORGCA/COGAI, said the awardees deserved to be honoured because they have worked hard to create numerous jobs and better the lives and living conditions of many people in Ghana, adding: “We don’t honour just any people, we honour people of great integrity and credibility”.

Mr. Adjei, on behalf of the awardees, encouraged Ghanaians – especially the youth – to embrace humility, hard work, God-fearing and Knowledge over quick means of getting money.

Mr. Adjei is a businessman who hails from the Ashanti Region of Ghana and has a business interest in Lottery, Commerce, Real Estate, Hospitality, Transport and Entertainment.

He has employed over 350 Lotto Agents and 100,000 Lotto Writers across Ghana. In the Real Estate, Hospitality Industry, and Transport Sector he owns Hostels and Houses; a considerable number of vehicles, managed by Rema-Jason Company Limited; and social gatherings and events.

Population 2020 Demographics can be a potent driver of the...

Qatar 2022: World Cup in Gulf state could be 48-team tournament