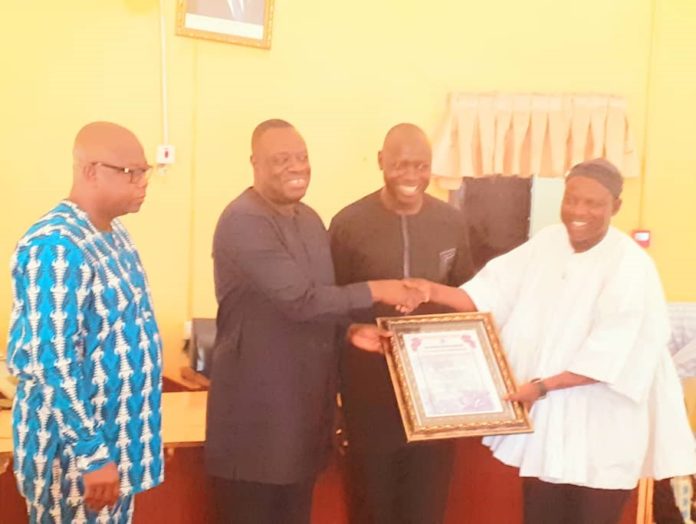 The Northern Regional Communications Team of the New Patriotic Party (NPP) has commended Dr. Ibrahim Mohammed Awal, Minister for Business Development for his continuous support to the team.

The citation presented to Dr Awal read “your consistent financial and other forms of assistance has enabled the communications team in the region to educate and inform the people about government policies and programmes”.

The citation which was presented to Dr. Awal by the Northern Regional Minister, Mr. Salifu Saeed in Tamale further stated “Our regular engagement with the people is enabling us to appraise the people of government policies and programmes such as One District, One Factory, One Village, One Dam, Planting for Food and Jobs, Entrepreneurship and Free Senior High School”.

Present at the ceremony were the Director of the Northern Regional Communications team, Sule Salifu; the Deputy Minister for Energy, Dr. Mohammed Amin Adam; Metropolitan and Municipal District Chief Executives (MMDCEs), Parliamentary Candidates of the New Patriotic Party, Regional Executives of the NPP, as well as party communicators.

Dr. Awal is on a week-long tour of the Northern region to engage with party members, religious leaders, Chiefs ad other stakeholders to educate them on governments initiatives.

Mr. Saeed called on the people of the region to unite for socio-economic development.

On his part, Dr. Awal entreated party members to constantly dialogue with the people to help educate them on government’s activities aimed at improving the living conditions of the people.

He said “the Akufo -Addo’s led government has within two and half years implemented an unprecedented number of developmental programmes in sectors such as roads, railways, health, education and agriculture”.

Dr. Awal therefore urged the people to rally behind the government to enable it undertake more developmental projects to improve the lives of the people.

The Regional Communications Director, Mr. Salifu said the team has intensified its public education effort in order to help educate the people on governments efforts to provide jobs for the youth.

He therefore appealed to political appointees from the region to increase their support to enable the team to achieve its goals.

Looking on are Mr. Salifu and Mr. Sibdow, Regional Secretary of the NPP.

Proceed cautiously with the nuclear option