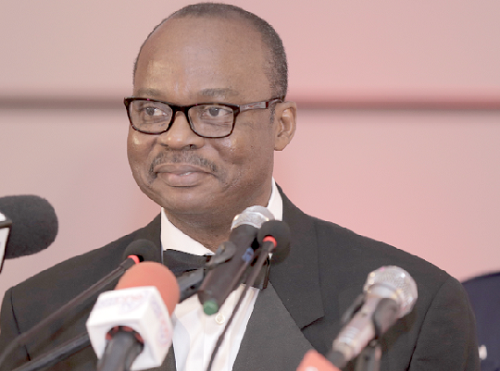 Dr. Ernest Yedu Addison, Governor of the Bank of Ghana, has stated that poor records and non-existent data has become a major challenge for receivers of the nine collapsed banks to recover debts owed to people and institutions.

He said out of the total loan debt of GH¢10.1billion owed to people and institutions by these banks prior to the revocation of their licences, only GH¢731million has been recovered through loan repayment by customers, placement, liquidation of bonds and income and other income sources, leaving a balance of about GH¢9.3billion yet to be recovered.

Dr. Addison, addressing issues on the Banking Sector reforms at the fourth CEO Summit in Accra, said the difficulties had limited effectiveness of the receivership process and delayed its outcomes.

He said the situation had led to an engagement of the judicial system by the receivers to help in the recovery of certain assets from shareholders, directors and other loan defaulters.

He said there are currently about 50 cases pending before various courts across the country; but despite the efforts, the recovery process is being challenged by acts of some individuals involved who have resorted to some tactics to frustrate the system.

Dr. Addison mentioned that among the challenges is poor records, which makes it difficult for receivers to identify and pursue some of the loan defaulters due to insufficient or non-existent information on their transactions.

He further explained that investigations have so far shown that some assets were not registered in the names of the financial institutions, but in the names of connected parties, making it difficult to dispose of the underlined collaterals to offset their outstanding loans.

The Governor underscored the judiciary’s critical role in ensuring efficient adjudication of commercial cases, but said the country will not be able address some of the problems associated with the poor structural regime concerning Non-Performing Loans if the courts fail to adjudicate some of these cases with speed.

He recommended the setting up special courts to adjudicate matters relating to the specific issues arising out of the banks’ resolutions and revocation of licenses, as well as issues relating to collateral.

Dr. Addison said a swift and fair judicial system will enhance efforts being made by the central bank to bring some sanity into the banking sector, by fighting against financial crime including money-laundering.

Mr. Ernest De-Graft Egyir, Chief Executive of the Ghana CEO Network, thanked the Governor for shedding more light on what is going on in the banking sector in order to ensure good corporate governance among the leadership of institutions.

See Also:  Transparency in the extractive sector yet to bring accountability

He said the Summit, on the theme ‘The Futuristic Economy: Technology-Driven Future of Business and Governance for Economic Transformation’, had become necessary for discussions because the world of business and governance is at the threshold of transformation driven by emerging technologies.

He said the emerging technologies are profoundly changing the world of work with regard to jobs, skills, education, industry, manufacturing, business models and economies among others, and CEOs must strategise to meet the demands and challenges which may arise from this transition.

Inspiring Startups: ‘I started my business from my bedroom’

West Africa not ready for Eco