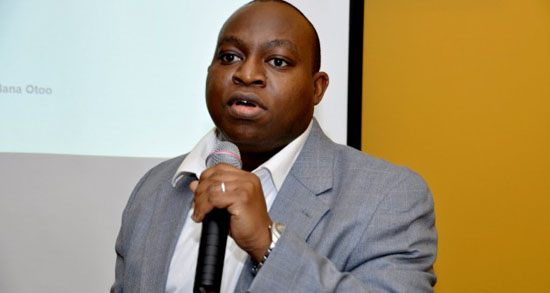 The consolidation of five local banks that were unable to meet the GH¢400million minimum capital requirement of the Bank of Ghana into the Ghana Amalgamated Trust (GAT) was the best decision to de-risk the sector from going under foreign control, its Managing Director, Eric Nana Otoo, has indicated.

Speaking as a panelist at the Ghana Most Respected CEOs Breakfast Series in Accra, he said it was very prudent for government to step in to maintain the localness of the banking sector after it emerged that only four indigenous banks were among the 18 banks which had met the new requirement.

He said GAT, as an innovative novel product from the government – and with the right expertise, will help to reshape the five local banks into being competitive and with capabilities to stand at par with its foreign counterparts; and that its success could be replicated in other areas of the economy.

“In an environment where the majority of banks are foreign-owned, government could not properly implement its monetary policy because the foreign banks could decide to play ball or not.

“Also, we have given up too many of our industries to foreigners; oil and other resources like gold and bauxite are controlled by foreigners – and so are the telecoms and beverages sectors; if we leave the banking sector to foreigners, we will continue to witness depreciation of the cedi,” he said.

Mr. Otoo said the GAT will provide room for pension trusts, which are sources of patient capital, to be put to work in support of local industries with the proper structures and products to generate good returns but not mortgage our country to foreigners.

“I believe that had there not been this intervention to support some of these local banks which didn’t meet the requirement, 2019 would have been a much worse year compared to 2018.

“Because for these foreign-owned banks and other multinational companies, the profits they make are repatriated to their respective countries; and because they demand dollars in the repatriation, it takes a toll on the cedi like we have been experiencing recently,” he said.

Beyond the injection of capital, the trust – according to Mr. Otoo, will also spearhead the real transformation of those banks in the areas of competitiveness and capabilities for growth.

He said: “Essentially, we need to strengthen our banks; so, after raising and putting these monies into the banks, we will undertake some transformational programmes in corporate governance, improving management capabilities, clearer niche-based strategies, and other innovations that will add value to the banks.”

The Ghana Most Respected CEOs Breakfast Meeting, on the theme ‘Saving the Banking and Finance Sector’, brought together top business executives and owners as well experts in the financial set-up to discuss and propose innovative ideas to better the lot of the banking industry.

Forward and Upward: Trials, Triumphs and Prospects of Akate Farms