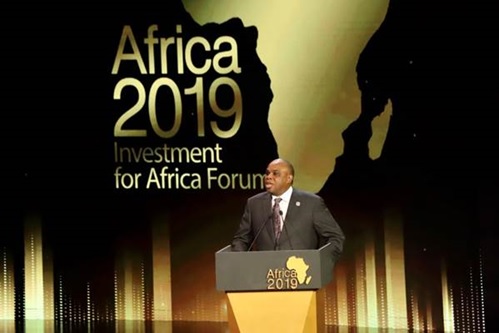 The African Export-Import Bank (Afreximbank) has already disbursed $15 billion of the $25 billion it committed in support of intra-African trade under its current five-year strategic plan, Bank President Prof. Benedict Oramah has said.

Confirming that the Bank was delivering on the commitments it made in support of the implementation of the African Continental Free Trade Agreement, Prof. Oramah told the attendees at the opening of the Africa 2019: Investment for Africa Forum in Egypt’s New Capital City on recently that the funding was helping bridge the trade finance gap in Africa.

He added that Afreximbank would soon commence the piloting of a Pan-African Payment and Settlement System which will allow cross-border trade in Africa to be done in national currencies, thereby addressing the issue of high cost of payments.  Prof. Oramah also said that the Bank was building a trade information portal, which would be launched by year end, to improve knowledge and access to critical trade information across Africa and was developing industrial parks across the continent.

Prof. Oramah added that  the Bank was also working with the African Union to organise the second Intra-African Trade Fair in Kigali in September 2020,. The trade fair would underpin a market of 1.2 billion people, attract over 1,000 exhibitors and 5,000 buyers and generate over $32 billion in trade deals.

The President said that Egypt had become the largest recipient of foreign direct investments in Africa, despite witnessing a retreat between 2011 and 2013. He attributed this development to the return of confidence to the Egyptian economy due to the visionary leadership of the country.

The two-day Africa 2019: Investment for Africa Forum was organised by the Egyptian Ministry of Investment and International Cooperation, in collaboration with the Ministries of Foreign Affairs and of Trade and Industry. It was held under the auspices of Egyptian President and current Chairman of the African Union , Abdel-Fattah Al-Sisi.