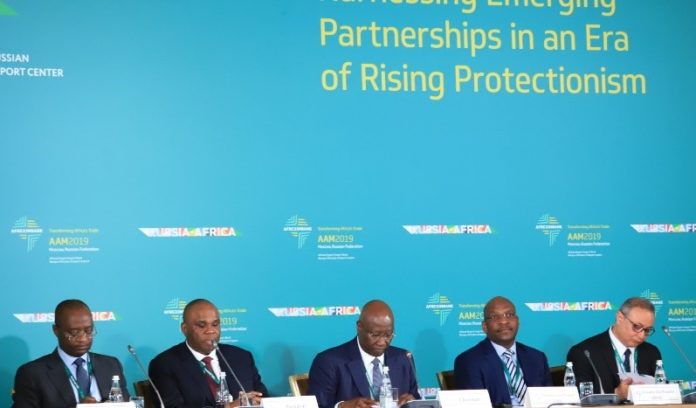 The African Export-Import Bank (Afreximbank) has declared and approved a total of US$69million to its shareholders as dividend from its 2018 earnings.

This was according to decisions reached during the Annual General Meeting of Shareholders (AGM) of the Bank, which ended in Moscow last Saturday.

The shareholders also appointed one new member to its Board of Directors and decided to retain Nigeria, which has been its Chairman since the last meeting in Abuja in 2018, in that position for one more year.

In another decision, the AGM approved the Bank’s 2018 Annual Report, which includes the 2018 Financial Statements.

In an address, the President and Chairman of the Bank – Prof. Benedict Oramah, said the Bank’s total revenue grew by 24% in 2018 to hit US$806million while the net income increased to US$276million, representing a 26% growth on the level of 2017.

The Bank’s total assets, including contingent liabilities, went up by 15% from US$13billion in 2017 to US$15billion in 2018. Profit performance reflected strong growth in interest and fee income from diversified sources by geography and financial products.

He informed the shareholders that during its extra-ordinary session in Nouakchott in July 2018, the African Union Heads of State Summit had approved accreditation of the Bank to the AU, allowing the AU to adopt most of the Bank’s flagship initiatives as continental initiatives. That action will help to accelerate adoption of such initiatives at the national level, thereby improving the pace of implementation at lower cost.

Prof. Oramah explained that the accreditation is a privilege that was previously enjoyed only by the African Development Bank and United Nations Economic Commission for Africa.

The AGM marked the conclusion of the Bank’s 2019 Annual Meetings (AAM2019) with the seminar and meeting of the Advisory Group on Trade Finance and Export Development in Africa, which was declared open by Russian Foreign Minister Sergey Lavrov.

The AAM2019 was held under the theme ‘Harnessing Emerging Partnerships in an Era of Rising Protectionism’, and deliberated on such topics as: How South-South trade can be a path to Africa’s integration into the global economy; Multilateralism in the current global economic order of protectionism; and the role of investing in Africa’s infrastructure in accelerating intra-African trade and economic development.

Highlights of AAM2019 include launch of the African Trade Report 2019; launch of the Afreximbank Export Trading Company Strategy; and a half-day programme of activities dedicated to Russia–Africa investment cooperation. A number of trade agreements were also signed at the event.

South Africa has till 2019 elections to cash-in on global windfall:...