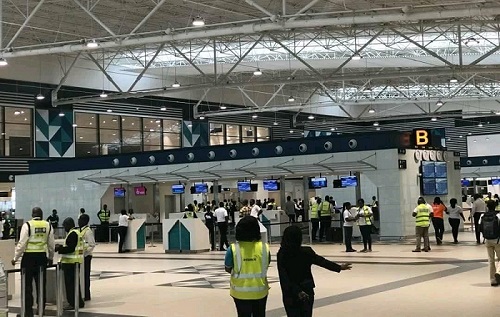 The Ghana Airports Management Company (GACL), a state-owned company responsible for managing all airport facilities in the country, is financially constrained due to the high cost of the funds secured for constructing the state-of-the-art Terminal 3 at Kotoka International Airport (KIA).

The B&FT on August 12, 2015 reported that the GACL had secured an amount of US$250million from a consortium of banks led by Ecobank Capital.

Aviation Minister, Joseph Kofi Adda, speaking at the ground-breaking ceremony for the construction of a new headquarters building for the aviation sector regulator – Ghana Civil Aviation Authority (GCAA) – said cost of the funds is too high and is crippling the GACL.

“In the recent past we have had exaggerated or bloated cost and the use of expensive money to carry out projects. In some cases, we’ve had a very high-interest rate on loans; such as the loan used for the Terminal 3 construction.

“The interest rate of 8.5% at the time was very high and now a few years later we still have the effect of what one might say amounts to strangulation of the Ghana Airports Company – by preventing it from taking up more projects freely as its revenues are being held in escrow to serve and retire the loan,” he said.

He indicated that government has successfully renegotiated the rate down from the initial 8.5 percent to 5 percent. “Government had to renegotiate it to 5%, which is still not enough; and so we continue to look for ways of bringing it down even lower,” he said.

The GACL in 2014 announced that it was to expand facilities at the Kotoka International Airport to accommodate the increasing passenger throughput and increasing number of airlines servicing the facility.

Part of the proposal was construction of the third terminal to be known as Terminal 3 within the KIA enclave, resurfacing the runway, taxi-ways, new aprons, installation of ground lights, laying underground fuel lines, and installation of runway lights.

This, however, required huge capital outlay that the sole shareholder, government, was unable to provide given its limited budget.

Management of GACL, following promulgation of the Airport Tax Amendment Act in 2013 – which allowed the GACL to retain 100 percent of its revenues – turned to private capital to improve aviation infrastructure in the country.

Prior to amendment of the Act, 60 percent of all airport taxes went directly to the Ghana Revenue Authority to support the national budget – while GACL retained just 40 percent.

Mr. Adda noted that the GCAA, as the leading aviation sector regulator in the country, is in need of an ultra-modern office facility to effectively execute its mandate.

He said urged the Authority to ensure that the public purse is adequately protected at all times as directed by the President, before, during and after construction of the facility.

Victoria Abena Takyi named among 50 most influential CMOS in Ghana