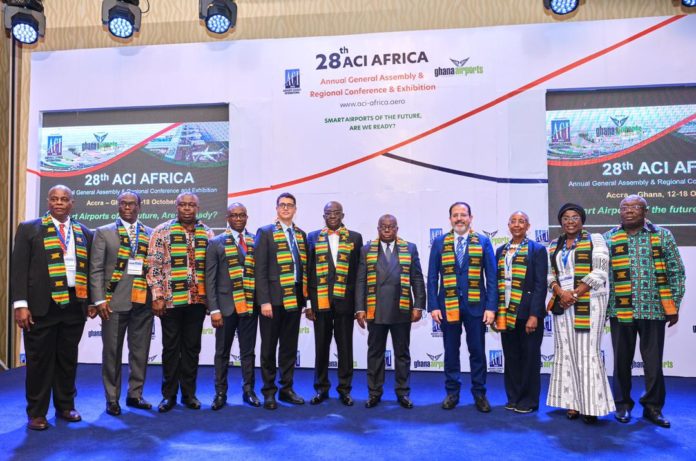 President Nana Addo Dankwa Akufo-Addo has assured the travelling public of better and improved aviation infrastructure, via upgrading existing ones into international airports and the construction of new ones to open up other parts of the country.

Speaking at the opening ceremony of the 28th Airports Council International (ACI) Africa Annual General Assembly & Regional Conference and Exhibition, President Akufo-Addo said: “The Ministry of Aviation has initiated plans for a dedicated programme dubbed ‘Aviation-driven developments’ that is set to use aviation as a driver of socio-economic transformation.

“Our airports will continue to undergo systematic facelifts through infrastructure rehabilitations. We also intend to continue opening up the country by constructing additional airports to serve as feeders to KIA.”

He noted that the growth in international passenger numbers and relatively high number of airlines operating in the country are testament to the right policies being implemented.

“International passenger numbers have grown by 6.7 percent as at September 2019 compared to 2018. Air freight movement has increased by 5.9 percent. Currently, 38 airlines are operating in Ghana and they connect directly to 30 different destinations around the globe.

“The progress being made in the aviation sector is ample evidence of our commitment to collaborate and cooperate with all industry stakeholders, and to champion the cause of global and regional policies such as the ‘no country left behind’ initiative under the single African air transport market – thereby enhaning safety and security,” he said.

Aviation Minister Joseph Kofi Adda said the Tamale and Kumasi airports are to be further upgraded into international airports to serve as alternatives to Kotoka International Airport, while a new airport is to be constructed at Takoradi.

“We should expect the Takoradi Airport: hopefully, by the end of this year we will conclude all of the arrangements that have to be put in place – the funding, the processes from Cabinet to Parliament. Once that is done, going into early next year we will be able to break ground and start; then we will upgrade the other airports.”

A study by the International Air Transport Association (IATA) shows that the economic benefits of aviation investment are still large, and provide a strong justification for investment in the aviation industry.

The study found that for developing economies the annual economic rates of return range from 16 percent to 28 percent. “Developing countries face capital costs, especially for new aircraft, that are similar to those faced by developed countries. As such, though the boost to GDP is higher in proportional terms for developing economies, the capital costs are still high. Nevertheless, the available economic return is still large and provides a strong justification for investment in the aviation industry.

“Greater aviation connectivity – and the improvements in productivity and GDP growth it can provide – can also help to boost a country’s competitiveness. By way of illustration, the World Economic Forum (WEF) has developed a Global Competitiveness Index for the travel and tourism sector. The WEF’s index incorporates many of the factors necessary to develop connectivity and create wider economic benefits in terms of productivity and economic growth. There is a clear, positive relationship between a country’s connectivity and its performance in the WEF index,” the report noted.

The number represents one of the highest amounts of delegates recorded at any single ACI AGM. It is being held under the theme ‘Smart Airports of the future are we ready?’