Government has reaffirmed its commitment to constructing a new, befitting airport in the Brong Ahafo Region, due to some challenges frustrating efforts to expand the current Sunyani airport.

This is against the background that Sunyani Airport land has been encroached on by private developers. Besides, there are huge valleys and streams at both ends of the 1,400 metre runway, making future expansion to befit an international airport with a runway of at least 2,000 to 2,500 metres almost impossible.

The situation, according to Aviation Minister, Joseph Kofi Adda, rekindles the option of constructing a new airport in the region to meet international standards. He said: “The extent of encroachment and settlement around the facility is such that we can’t expand and put up more buildings and hangars. Therefore, we have to engage the financiers and evaluate the facilities that will be required, and the associated terms as well as how best the Ghana Airport Company Limited (GACL) can recoup those monies and service the facilities”.

The minister made this observation when he led a team on a familiarisation tour of the Sunyani Airport. The team included his deputy – Kwabena Okyere Darko-Mensah, aviation experts and engineers as well as other captains of the GACL and the Civil Aviation Authority. The minister and his entourage later inspected a designated airport land at Nsoatre, located on the shoulder of the Sunyani-Berekum highway.

Mr. Adda indicated that government, in the interim, will see how best to renovate the Sunyani Airport – especially the runway, in order to reopen it to commercial aircraft – latest by the end of 2019. “We will task our engineers to assess the situation to know how to reclaim some metres for the runway, and repair the cracks and worn-out bitumen to ensure safe landing and take-off for aircraft,” he said.

The Sunyani Airport has since 2015 been closed to commercial aircraft. This was necessitated by the deplorable state of the 1,400-metre runway.  The Airport was originally constructed in July 1942 as an airstrip for the British Allied Forces in the colonial days. It was upgraded into an Airport in 1969 and subsequently commissioned in 1974. It has since not seen any major renovation. 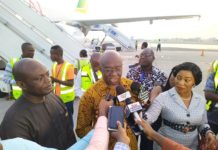 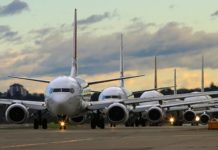 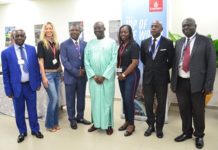 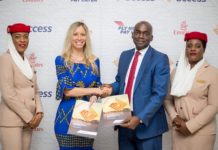