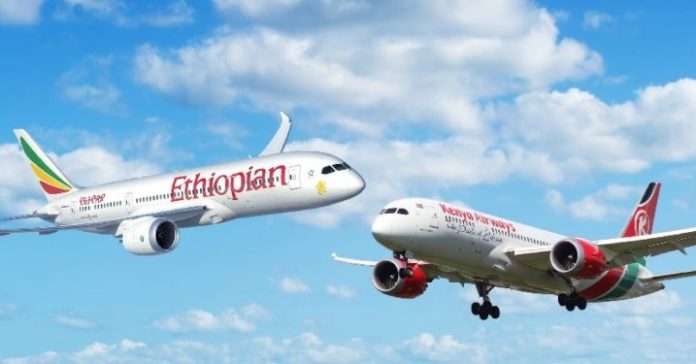 Africa World Airlines (AWA), ASKY Airlines and Ethiopian Airlines have teamed up to provide passengers with seamless and stress-free air travel within the West Africa sub-region and various international routes they serve, as they position themselves for expected growth in the aviation industry over the next half-decade.

The interline agreement between the three airlines is the first of its kind in the West Africa sub-region, and offers Ghanaian passengers the opportunity to travel seamlessly from Tamale, Kumasi and Takoradi to more than 140 destinations in Africa, Europe, the Middle East and North America without having to collect baggage and check-in again at Kotoka International Airport, which is currently the country’s main international airport.

The interline agreement is a commercial arrangement between Africa World Airlines (AWA), ASKY and Ethiopian Airlines (ET) to handle passengers when they are travelling on multiple airlines on the same itinerary. This allows passengers to check their bags through to their final destination.

The strength in the synergy ensures that passengers still maintain their allowable two 23kg bags, and have a stress-free travelling experience.

Intra-regional travel is on the increase as more and more passengers now travel between Accra and other countries in the sub-region, Ghana Airports Company Limited’s first quarter passenger data has shown.

Regional passenger throughput, which has lagged behind Europe and other regions, accounted for 19.8 percent of the total aviation market as at the end of March 2019.

Travel within the West Africa sub-region was in the past a difficult task. There were no direct flights between various points in the sub-region, and such interline agreements are seen as a way to deepen connectivity in the sub-region.

Genet W/Michael, Ethiopian Airlines’ Country Manager noted: “The airline, by this partnership, is ready to serve Ghanaians from any destination operated by AWA to any of the over-120 international destinations across the five continents ET serves.  The seminar in Kumasi is to introduce this partnership to our trade partners and have open discussions on issues that they may have”.

Africa’s largest carrier, Ethiopian Airlines (ET), operates one of the youngest fleets in the world. The airline currently operates very modern and spacious A350 aircraft on the Accra route. It operates to more destinations on the continent than any other airline, and also offers flights from Accra to the various destinations in Europe, the Americas, Asia, Gulf and Middle East via its hub in Addis Ababa.  ET flies to more than 120 destinations worldwide.

Richard Kyereh, Head of Commercial of AWA noted: “This partnership is to ensure that we provide very good flying options to the travelling public and improve on the travelling experience for the many Ghanaian travellers. The stakeholder engagement with our agents in the Ashanti Region is to introduce this new partnership and associated services to them, and address any questions they may have”.

Africa World Airlines (AWA) is a Ghanaian airline based in Accra. AWA started operations in 2012 and now operates a fleet of 8 all-jet aircraft across 8 destinations throughout Ghana, Nigeria, Liberia and Sierra Leone, with services to Cote D’Ivoire planned to commence soon. AWA is the only IATA member airline registered in Ghana, and maintains IOSA certification – the global gold standard for aviation safety.

Asky Airlines has steadily built up its network and now offers several flights per week to almost all countries in West Africa, and major commercial and popular destinations in Central Africa. It recently started flights to South Africa.

“We are deepening connectivity in the sub-region and improving the travelling experience for passengers with this novel partnership. It was very important to meet our agents in Kumasi, brief them about this new service and address all any issues they may have,” Worlanyo Afadzinu, ASKY Airlines’ Country Manager said.

The Paradign For A New Ghana