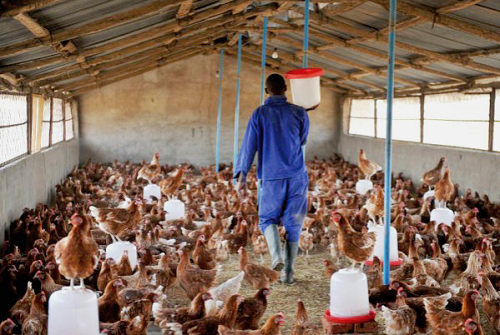 Members of the Ghana National Association of Poultry Farmers (GNAPF) believe that they are now in a better position to increase their productivity and incomes, after receiving capacity building support from the Skills Development Fund to upgrade their skills in poultry management practices.

A total of 1,200 poultry farmers from across the country benefitted from the poultry management training, which has upgraded the skills of members to increase productivity and incomes.

The Vice President of GNAPF, Mr. Napoleon Agyemang Oduro, stated that as a result of the training support, members of the association are enhancing their productivity through an improvement in the growth rate of birds and a reduction in morbidity and mortality of birds, leading to an increase in revenue for the farmers.

Members of the association also testified that through additional support from the Animal Science Department of Kwame Nkrumah University of Science and Technology (KNUST), poultry farmers belonging to GNAPF have benefitted from weight improvement techniques for birds, which is helping the farmers to get better value for their birds.

Poultry farming in Ghana has seen dwindling fortunes in the last decade, due to the lack of skills and knowledge to prevent high morbidity and mortality of birds. The industry has also faced stiff competition from imported cheap poultry products that has negatively affected productivity, income and profit.

Poultry farmers currently produce only 10 percent of the broiler meat consumed in the country, and this is due to lack of skills and knowledge to counter the growing threat of imported chicken.

There is also the problem of disease outbreaks, which has also negatively affected the poultry industry’s prospects in the country. So acute are the challenges that local giants such as Darko Farms, Akate Farms, Jokas Farms Limited, have all become pale shadows of themselves, leaving the industry in a distress situation.

It is in this regard that the poultry farmers’ association sought the capacity building support from SDF in May 2014, to train its members in poultry production and management and enable the farmers to enhance their productivity income.

The leadership of GNAPF realised that the majority of their members lack entrepreneurial skills, innovative marketing strategies and leadership skills. These capacity gaps were slowing down the growth of poultry businesses, thus rendering them uncompetitive and unproductive on the local market. Ultimately, these skill handicaps deprived poultry farmers of the opportunity to get a fair share of the local market to facilitate business growth and development.

To address these capacity needs, members of GNAPF again applied for a BDS grant from the Business Sector Advocacy Challenge (BUSAC) Fund in September 2017 to enable them polish their business management skills.

Members of the association believe that these skills will enable them to improve their market share, improve their competitiveness, increase productivity and incomes.

Mr. Oduro stated that the association is optimistic that these skills will help them grow their poultry farm businesses, and assist their drive to reposition the poultry industry so it recovers from the ailing times.

Even before members of the poultry farmers’ association embarked on their quest to improve their technical and managerial skills, they saw a need to address some challenges in the business environment that were hampering growth of the poultry industry in Ghana.

One of those key challenges in the business environment was the collapse of broiler production in Ghana, as a result of unfair competition from imported cheap poultry products. From a market share of nearly 100 percent in the early 1980s, local producers now account for less than 3 percent of market share for poultry products.  The collapse of broiler production also adversely affected the related hatchery, feed mill and associated industries. To save the poultry industry from further decline, the Ghana National Association of Poultry Farmers sought funding from the BUSAC Fund in 2011 to enable them advocate for enactment of the ECOWAS Common External Tariff on poultry imports.

With the support of its Development Partners – DANIDA, USAID and the EU – the BUSAC Fund provided an advocacy grant to the leadership of GNAPF that enabled them to press home their demands for policies that protect the local poultry industry from unfair competition by imported poultry products. As part of their advocacy action, the leadership of GNAPF had fruitful dialogue sessions with duty-bearers on the need to protect the local poultry industry from unfair external competition.

The Vice President of GNAPF, Mr. Napoleon Agyemang Oduro, described the support by BUSAC Fund as a game changer, since it has helped to put the association on a good path to turning around the poultry industry’s fortunes.

In an interview with Mr. Oduro on October 6, 2018, he explained that through the BUSAC gran, they have been able to build the capacity of 38 of their leaders at the national, regional and district levels on how to identify key challenges in the industry, and sensitise other members as well as engage in healthy discourse on how to address those challenges.

“There were many misconceptions and myths about eating eggs, which was a negative development for our industry; but through BUSAC’s support, we have been able to engage government and appropriate stakeholders to discredit those myths,” he said.

Mr. Oduro said the great support that GNAPF received from BUSAC could not be measured, especially when there is urgent need for strong engagement with policymakers to put more investments into the poultry industry to create jobs and expand the economy.

“Importation of poultry and poultry-related products is still high in this country, and this is making the local industry uncompetitive. Meanwhile, government has a mantra of making the private sector the engine of growth for the country. Through the support of the BUSAC Fund, we have been able to build capacity in research; so we are able to provide data and strong evidence to government on why they need to support the local poultry industry to grow. If the private sector is the engine of growth, we are telling government that the engine needs fuel to move,” he said.

Mr. Oduro however added that more work remains to be done, for which reason the GNAPF will be an Oliver Twist by asking BUSAC Fund to extend more support packages to the association.

Gender Galamsey: From the margins to the mainstream