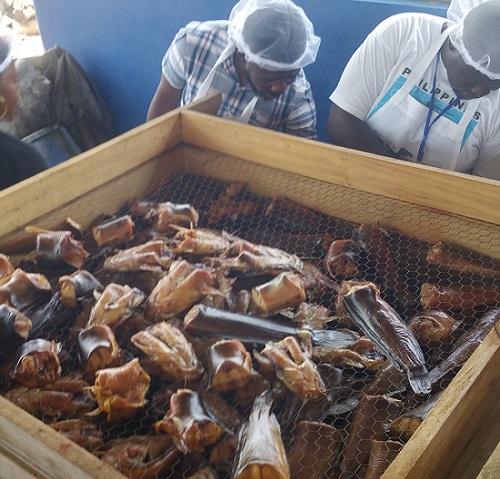 The Food and Agricultural Organisation (FAO) has introduced an innovative oven for the smoking of fish that reduces the Polycyclic Aromatic Hydrocarbons, PAH, in smoked fish to 0.3ppm/kg – a standard that makes it beat the European Union (EU) market standard of 2ppm/kg.

The improved method (smoker), known as Thiaroye Processing Technique (FTT), is made locally but does not use the usual firewood that produces a lot of smoke during fish processing, and is also environment-friendly.

Samuel Armah Mensah, a graduate of the University of Ghana, Political Science Department – who is a beneficiary of the FAO’s FTT, told the B&FT that he switched from the traditional oven known as ‘Chorkor’ smoker and it has saved him a lot of money.

He said the ‘Chorkor’ smoker and the metal drum kiln, although offering economic gains, contain high levels of Polycyclic Aromatic Hydrocarbons (PAH) due to the use of firewood as the smoking fuel.

According to him, the FTT has made it possible for him to now export to the EU market without any hindrance; a move that he said has made him financially stable since he completed his university education.

“I applied for the FTT by the FAO and I was given the opportunity, so I decided to go into fish processing,” he said.

Born and living at Elmina in the Central Region, Samuel said he finished university and was jobless; and so as a person born in a typical fishing community, his only option was to venture into the fishery sector.

However, the FTT innovation came as a very good opportunity for him as many people trust his process of smoking the fish, which has also earned him many buyers both in Ghana and EU.

He said using the FTT to smoke his fish makes the outcome very acceptable to the EU market.

“FTT beats the EU standard by giving 0.3 ppm /kg amount of PAH in smoked fish, which is less than the EU requirement,” he added.

Omar Penarubia, an official from the FAO, in an interview with the B&FT said the FTT was developed as a result of the constant rejection of smoked fish from African countries by the EU market.

“Several countries from Africa suffered rejection by the EU market. So this raised awareness that a proper method should be used to reduce the PAH in smoked fish,” he said.

He said further attention and support should be given to the small and medium enterprises and processing associations trying to reach the EU PAHs threshold (2 ppm/kg) by improved methods, making traditional smoking safer and directly benefitting the Ghanaian population.

Speaker of Parliament to be sworn in as ag. President

A review of SDGs and affordable housing

The phone, the Computer and the Customer (cont’d)