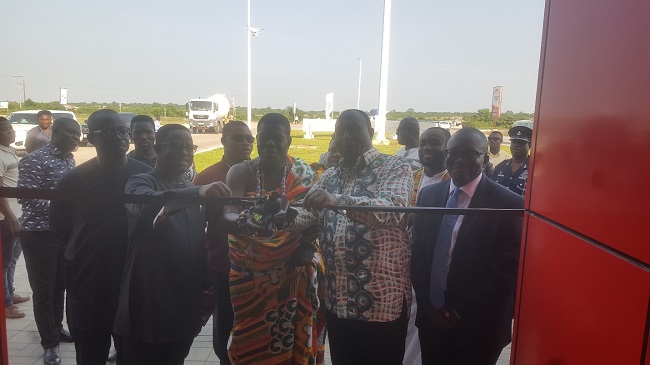 Two donors have pledged around US$100million to support the establishment and development of industrial parks across the country, government has announced.

The two donors are the Department for International Development (DfID), a United Kingdom government agency that is committing US$20million, and the World Bank Group with US$75million. The funds are to be used in setting up industrial parks as part of efforts in attracting world-class producers so as to boost production.

Trade and Industry Minister, Allan Kyerematen, revealed this at the inauguration of Dawa Industrial Enclave, which comes with 330KV capacity substation.

The facility is located at Dawa in the Ningo-Prampram district of Greater Accra Region.

“I am happy to announce that the DfID has initiated a project called the Jobs and Economic Transformation Project and has invested US$20million to support the development of industrial zones in Ghana.

“In addition to this, the World Bank is in the process of finalising another initiative called the Ghana Economic Transformation Project. The bank is going to invest an amount of over US$75million to support the development of industrial parks,” Mr. Kyerematen said.

Explaining the nature of the support and how it fits into the Ghana Beyond Aid agenda, the minister said Ghana Beyond Aid does not necessarily mean that the country no longer requires help to support its development; but rather, it means that whatever aid is attracted can only be a complement and a catalyst for development.

The park comes with a 330kv substation built at cost of US$30million; litigation-free land; and roads and amenities, and is the largest industrial facility in the country.

Commenting on the development, the minister was upbeat that it will have a multiplier-effect on the whole Ningo-Prampram district.

He said it will also act as gateway for investors wanting to settle here in order to take advantage of the Africa Free Continental Trade Arrangement.

The Chief Executive Officer of LMI Holdings, Kojo Aduhene, explained that the whole idea behind the facility is to build another Tema.

“The Tema Enclave is getting full, so we realised we need a new place. So, the whole intention is to build another Tema.

“The initial industrial park is 2000 acres but the total extent of the land is 20,000 acres, so we have enough space to build another industrial city here,” he added.

He said with US$60,000 one can acquire an acre of land within the enclave, which currently hosts about four manufacturers.

The Dawa Substation is the second substation to be built, owned and operated by a privately-owned wholly Ghanaian utility – Enclave Power Company, a subsidiary of LMI Holdings.

Apart from the electro-mechanical works, the Dawa Substation as well as the Tema substation were developed largely with the use of local expertise – in the areas of design, civil works, project supervision and commissioning, the company added.

“Although Enclave Power Company is an electricity distribution company, we had to undertake these massive investments into the power transmission side of the business to enable us deliver electricity to our customers at very high levels of availability and reliability,” said its Managing Director, Norbert Anku.

Foresters angry over obstructions …17 checkpoints from Peki to Nsawam