The Ghana Community Network Services Limited (GCNet) has presented 150 Dell Laptops to the Ministry of Finance for use by the Domestic Tax Revenue Division (DTRD) of the Ghana Revenue Authority(GRA).

According to the Executive Chairman of GCNet, Dr Nortey Omaboe the donation was made in response to an identified need by the DTRD to become more flexible in the use of the Total Revenue Information Processing System (TRIPS) that GCNet has deployed for it.

He said whilst DTRD Officers have desktop computers installed for them at their various Tax Offices, their flexibility to undertake field operations are by the limited number of laptops presently available to them.

He added that this situation constrains their capacity to undertake tax audits efficiently.

GCNet has deployed the TRIPS system for the DTRD in sixty-eight (68) Tax Offices through- out the country. Mr. Nortey said the provision of these laptops will greatly optimize the use of the system adding that it will also help to ensure that the DTRD realizes its revenue target for 2018.

“Although 2017 was a remarkable revenue collection year for GRA (DTRD), the revenue target for 2018 makes it more imperative for it to re-double its efforts. Half-way through the year, it is noted that the GRA has to take effective measures during the second half year for this to be possible.”, said Dr Omaboe.

“In pursuit of these policy goals, if the efforts at widening the tax net and the tax compliance measures outlined by the Finance Minister during the Mid-year budget review, such as the intensification of taxpayer registration and issuance of TINs to them, the need to expand tax audits with better yields from such audits, then the officers have to duly be equipped to embark upon this exercise. We trust that the provision of these computer hardware to them will greatly help in this quest”, he added.

Mr. Nortey noted that GCNet has provided the Customs Division with over hundred computers which are in use at various customs stations for normal declaration processing, targeted compliance review and post clearance audits.

“We have also provided Examination Officers with Computer Tablets to enable them input their consignment examination inspections into the Ghana Customs Management System (GCMS) whilst conducting such examinations in the field to facilitate clearance processes. Officers of the Preventive Division have similarly been provided with Tablets and Android Phones to facilitate their tracking of transit cargoes whilst in the field”, he said.

He revealed that GCNet is engaged in serious discussions with the Preventive Division of GRA (Customs) with the view to supporting the Division to optimize usage of the deployed system whilst it takes certain radical measures to cheek abuse of the Customs suspense regimes.

See Also:  IMF spots trouble ahead for the global economy after 2020

Receiving the laptops, Deputy Minister of Finance, Kwaku Kwarteng expressed his gratitude to GCNet adding that the laptops will go a long way to aid in the discharge of the duties of their officers in charge of the TRIPS system.

He said: “It has been our concern that our men on the ground do not have enough of the devices that will help them fully work within the framework of TRIPS. So this donation will equip us to be able to do that more. It will improve our own capacity to benefit maximally from the equipment you have deployed.” 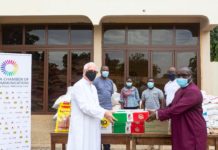 The path to financial freedom: a beginner’s guide