He said the bauxite is the gift nature has endowed the country with and it is prudent that government is exchanging it with the infrastructure, as this will help boost industrialize the country.

Mr. Agyepong said this during a panel discussion at the Ghana Economic Forum in Accra themed; Industrializing To Create Jobs-Stimulating Industry For A Self-Sustained Economy’.

Government has concluded the US$2billion bauxite deal with Sinohydro Group Limited after a meeting between President Nana Akufo Addo and China’s President Xi Jinping in Beijing.

The barter trade deal will involve alumina processed from bauxite deposits in the country for a facility of US$2billion from Sinohydro Group Limited for infrastructural development.

Speaking to Ghanaians living in China during his visit, President Akufo Addo said: “I finally concluded the barter trade deal agreement with President Xi during our meeting”.

He said this is a new source of funding that will be used to boost Ghana’s infrastructure in the area of roads, hospitals, schools among others.

He added that it was agreed as part of the deal that the bauxite will not be exported in its raw state but will be refined in the country before export.

“We will insist that the raw materials are processed before they are exported out of the country,” he said.

Mining promises to give more revenue to offset COVID-19 shortfalls 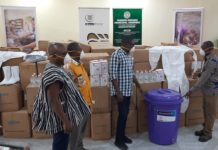