The insurance industry paid GH¢50 million to the government in corporate taxes in 2017 and currently employs about 12,500 people.

Kofi Andoh, Deputy Commissioner of Insurance, who disclosed this at the official inauguration of Serene Insurance Company Limited in Tema, Accra, said, as at the close of 2017, the industry recorded total assets of GH¢5.4 billion up from GH¢1.8 billion as at 2013.

According to him, gross premium income of GH¢2.4 billion was also recorded up from a little over GH¢1 billion in 2013.

“The industry has also developed micro insurance and as a means of providing access to insurance for the informal sector, low income earners and the vulnerable,” he said.

Currently, about 29% of the population is covered by micro insurance products, he noted. This, he added, is second only to South Africa’s 64%.

However, in spite of all these, he observed that the industry still faces some very serious challenges that inhibit its growth and efficiency.

He indicated that the first and most significant challenge is the very low contribution of insurance gross premium to the nation’s GDP.

He however, said, the National Insurance Commission (NIC) is implementing a number of strategies to help grow the penetration rate.

He revealed that, areas targeted for significant growth will include marine insurance, agricultural insurance and group life insurance.

Mr. Andoh also pointed out that another significant challenge the industry faces is the poor insurance culture of Ghanaians. According to him, insurance is regarded as the last thing in the minds of Ghanaians.

“Most people who buy insurance do so just to comply with the law. This may be partially due to the generally low financial literacy in Ghana and the poor claims culture of some insurance companies.”

He therefore commended the various players in the industry for collaborating to form the Insurance Awareness Coordinators Group to educate the public on insurance.

The Deputy Commissioner reassured the insuring public that the NIC will continue to monitor and enforce its claims payment guidelines, to enable claimants and the general public know what to expect when they file their claims with insurance companies.

“We are also building and plan to implement the Motor Insurance Data Base in early 2019 to address the issue of fake motor insurance. This will be an electronic platform to house all motor insurance policies, he said.”

He revealed that the police, public and relevant government agencies will also have access to confirm the authenticity of motor insurance policies. “This will make it easier for the police to ensure that all vehicles plying our roads are appropriately insured.”

He said it will also make it possible for passengers to verify whether commercial vehicles are properly insured before they board such vehicles. 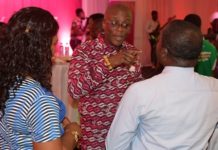 High Court orders for Exton Cubic licence to be restored