Students of Achimota School have been advised to stay focused and have a clear picture of the career paths they intend to take at an early stage, and work diligently toward achieving it.

In a mentorship programme organised by Ghana Energy Awards (GEA) last week Wednesday in Accra, the students were counselled to be determined as well as to demystify their minds of any misconceptions about the energy sector and boldly venture into the sector.

The programme, which converged prominent Ghanaian energy personalities and students to interact, was the first-ever Energy Personalities Outreach Programme of the GEA.

It seeks to extend the knowledge, talents and valuable abilities of personalities discovered through the awards process to the next generation through impactful ways, such as the mentorship programme.

Speaking at the event, Mrs. Kate Quartey-Papafio – Chief Executive of Reroy Cables who is the 2017 Female Energy Personality of the Year – urged the students to believe in themselves and know that anything in the world is possible as long as they put their minds to it.

Stressing on the role of entrepreneurs in nation-building, she said it is time for the country to rise and transform itself, and that this is only possible if the citizens can transform themselves into entrepreneurs who can provide solutions to problems in the various sectors, especially energy.

This, she added, will ensure the country’s growth and development as the power sector is the fulcrum for economic development.

As a major player in the production and distribution of power cables, conductors and provision of electrical power distribution systems to the electricity sector, her company – wholly Ghanaian-owned – is also linked to electricity distribution and transmission.

Conserving power domestically, he said, leaves more power for industry use and eventually leads to economic growth. He therefore urged the students to educate their families and friends on efficient electricity use and conservation.

He however observed that the sector is not a difficult terrain, but rather just like other fields which require determination and conscious effort for success.

Emphasising further, he noted that all of the technical crew at the Energy Commission are Ghanaians.

Dr. Kwame Ampofo, formerly Chairman of the Energy Commission and currently the Chairman of the GEA’s panel, said the theme ‘Preparing the Minds of Future Leaders’ was apt, and underscored the GEA’s objective to facilitate the means whereby prominent energy personalities would share and impart their extensive knowledge and experiences to the younger generation.

Henry Teinor, organiser of the Ghana Energy Awards, also encouraged the students to take advantage of the opportunity presented them to develop a keen interest in the energy sector. He also urged them to subject themselves to volunteerism. 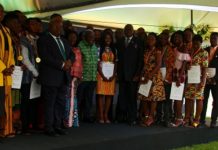 Ecobank Academy and IFRC join hands in an effort to boost...