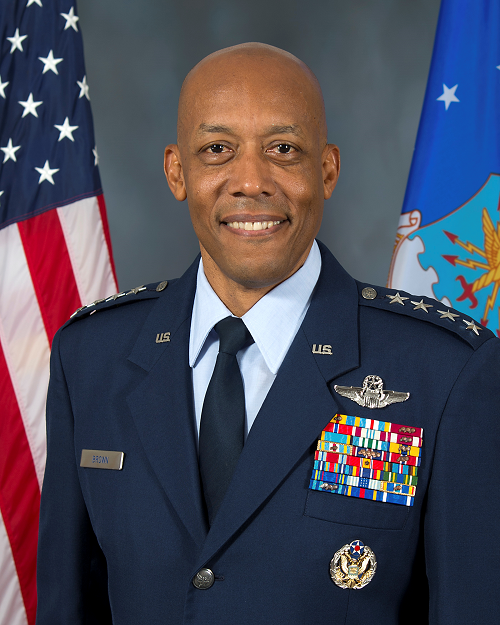 It is quite some exciting news in the midst of all the chaos currently engulfing the United States of America as the fight to get reforms to curtail injustice perpetuated against blacks across the country. This has received some sort of endorsement with protests around the world with the same intention.

Gen. Charles Brown, Jr. has been confirmed by the United States of America Senate as the next Air Force chief of staff. This makes him the first African American to serve as leader of one of the uniformed military branches. Gen. Brown, a distinguished airman is the current commander of the US Pacific Air Forces and has served the Air Force for 35 years, during which time he has held a number of important commands and flown combat missions.

His confirmation according to analysts comes at an appropriate time of nationwide unrest over racial injustice, a subject the general spoke passionately about in a powerful video message last week. Others are also convinced that could have led to the Senate’s approval of his appointment.

The Senate unanimously confirmed Gen. Charles “CQ” Brown, Jr. as the next Air Force chief of staff on Tuesday. He will be the first African-American airman to serve as a military service chief, making the general’s confirmation a historic achievement.

Brown, the 22nd Air Force chief of staff was commissioned after graduating from Texas Tech University in 1984 and has been in active service in the Air Force for 35 years. The distinguished four-star general has nearly 3,000 flying hours, including 130 combat hours, primarily in F-16 Fighting Falcons.

Otherwise known as CQ Brown, the experienced General has commanded a fighter squadron, two fighter wings, and US Air Forces Central Command. He has also served as the deputy commander for US Central Command. CQ Brown is one of the finest warriors the Air Force has ever produced according to Gen. Dave Goldfein, the current Air Force chief of staff who is set to retire at the end of the month, said after Brown’s nomination.

Gen. Dave Goldfein in touting the achievement of the CQ Brown further stated that “he’s led worldwide in the Pacific, Europe, the Middle East and Africa. When it comes to global, operational savvy there’s nobody stronger.” Speaking before the Senate Armed Services Committee early last month, Brown said that he is committed to seeing the Air Force achieve “irreversible momentum towards the implementation of the National Defense Strategy and an integrated and more lethal joint force.”

Responding to Brown’s confirmation on Tuesday 9 June 2020, President of the United States of America, Donald Trump tweeted that he is looking forward to working with the general, characterizing him as “a Patriot and Great Leader.” Brown’s confirmation comes at a time of tensions and unrest across the country following the death of George Floyd, a black man who died on Memorial Day in police custody after a Minneapolis police officer knelt on his neck for almost nine minutes.

Floyd’s death has ignited protests in dozens of cities with protesters calling for an end to racial injustice and police brutality. In the midst of the unrest, Gen. Brown spoke up and delivered a powerful message on race in America and in the military. Reflecting on personal experiences and race, Brown said that he was thinking about his historic nomination to be the first African American to serve as the Air Force chief of staff.

“I’m thinking about the African Americans that went before me to make this opportunity possible.” He said that he is thinking about the “immense expectations that come with this historic nomination,” particularly in light of current events. “I’m thinking about how my nomination provides some hope but also comes with a heavy burden,” he said, acknowledging that he “can’t fix centuries of racial discrimination in our country.”

Brown said that he is looking at ways to make improvements “so that all airmen, both today and tomorrow, can appreciate the value of diversity and can serve in an environment where they can reach their full potential.” He admitted, though, that he does not have all the answers. He expressed a hope for “the wisdom and knowledge to lead during difficult times like these.”