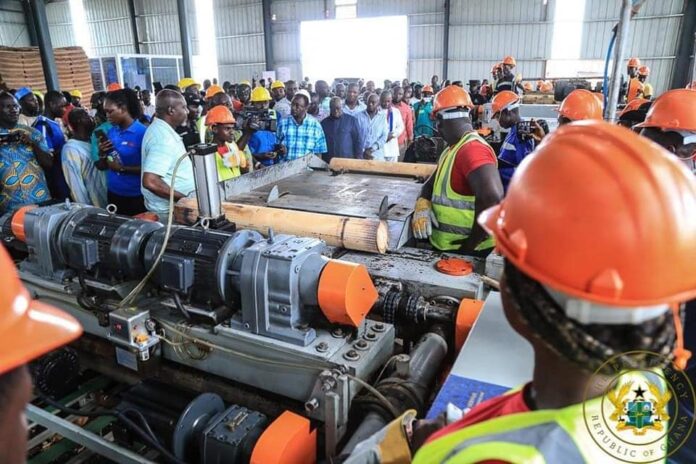 Trade and Industry Minister Alan Kyerematen has stated that 232 out of 260 factories under its flagship 1D1F industrialisation programme are near completion, with some operating at full capacity, when he addressed the Nation Building Updates held last week Thursday.

He further disclosed that through the 1D1F initiative, 76 projects have been completed and are in full operation. Also, 107 projects are under construction, 36 are ready to commence construction, and 13 are in the pipeline to be financed by the Private Finance Initiative (PFI).

As elections are around the corner, it is appropriate that government details its achievements in order that the electorate be informed about progress chalked up under the current administration; especially so as the ID1F was meant to create jobs and deepen the country’s industrialisation drive.

According to the Trade Minister, 162 of these factories – representing 72 percent – are new companies while the remaining 64 are existing companies which were rolled onto the programme.

The minister explained that the initiative has taken the form of public-private partnerships, with the government providing support by way of tax incentives, and waivers on duties and levies for imported machinery and raw materials.

Other incentives are the provision of free technical assistance and extension of infrastructure like electricity, water and roads. He believes the initiative will move the current status of the country’s economy from being agrarian to industrial and observed that the most powerful nations today happen to be the most industrialised.

He also indicated that the EXIM Bank has been the 1D1F programme’s main financier since 2017, and so far it has accounted for GH₵1.2billion.

Indeed, the progress of 1D1F is quite encouraging – especially considering the capital-intensity of such undertakings. However, in our estimation, the greatest achievement is that distressed and old industries that had collapsed or were comatose have been revived under the 1D1F programme – and that has been a great relief.

Boosting the country’s industrial capacity will not only create jobs but also promote the Made-in-Ghana agenda of government meant to cut down substantially our high import regime, which only adds to weakening of the local currency.

MTN Group works to bridge the digital divide, connects 100m to the internet